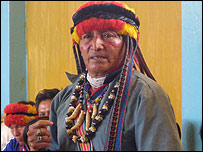 It is a story repeated throughout modern human history – people living sustainable lifestyles on land rich in resources, who are not forced to work on extracting them for a pittance and are not contributing to the economy in the way the wealthy would like… have no value. They must change in the name of progress. They must move into shanty towns, work dangerous jobs until the resources are gone and they must spend the rest of their time consuming alcohol. This is the story of Brazil’s Amazonian progress, and it’s a “success story” that Peruvian President Alan Garcia wanted to repeat in Peru.

When Peru signed the Free Trade Agreement with the United States, too much of the Amazon Rainforest was considered protected. Economists estimate 3.5 billion dollars’ worth of timber, mineral and oil products are locked in a 92,000-square kilometre (35,500 square miles) region of the Amazon basin, the size of Taiwan. US companies have been desperate to exploit these resources and the Peruvian Government couldn’t chip away at National Parks or indigenous land fast enough. To give some semblance of legality to all this, the US demanded a simple change in the law to make it easier for US oil interests to buy up the land.

Alan Garcia has long been attacked for not distributing the country’s new-found wealth – a booming economy has drastically changed the lives of the urban poor for the better, but outside of Peru’s cities little has progressed. The rural poor have seen no change, and have been fiercely demanding it.

Garcia, calling the people of the Amazon “backward”, declared that he would bring progress (of the kind the US and the wealthy in Lima have been asking for) and unilaterally issued a presidential decree that stated that now only 50% + 1 of any indigenous community in question would need to be in favour of land sale or development, as opposed to 66%+, and those who are not in favour would just need to adapt.

Garcia explained that these new development laws are aimed at improving the livelihood of indigenous communities by developing their farming, livestock and mining activities so they can better integrate with the country’s economy. The communities saw it as an attempt to make vast land-grabs easier in the future and really only intended to benefit the cities and the United States.

They began to protest and areas of the northern Amazon were completely shut down. Protests in Peru often mean hugely destructive acts and violence, and when these protests moved to oil and gas installations, pipelines having to be shut down, the police moved in and a state of emergency declared in parts of Loreto, Amazonas and Cusco. Garcia prepared the army to quell unrest and suspended the population’s rights to public gatherings, protests and free movements.

On the 20th of August, after more than a week of unrest, indigenous rights groups ended the protests after Congress stepped in to review the new laws with a view to revoke them. Many in Congress said Garcia had gone too far.

An angry Alan Garcia said revoking his laws would be a “historic mistake”. “If that were to happen out of fear of protesters, fear of unrest, Peru would some day remember it as the moment when change came to a halt and hundreds of thousands of people were condemned to poverty, exclusion and marginalisation,” he told reporters.

On Friday Congress voted 66 to 29 in favour of revoking the laws, sparking joyous scenes in Bagua in the Amazonas region where the worst violence took place. Not a single congressperson from another party backed Garcia. Roger Naja, president of the National Commission for Andean, Amazonian and Afro-Peruvian Peoples said people would remember Friday as “the day that the disappearance of the indigenous communities in the jungles and mountains was avoided”.

Alberto Pizango, leader of the Inter-Ethnic Association of the Peruvian Forest (Aidesep), hailed the repeal as “a moment of true democracy and true inclusion”. “This is a new dawn for the people of this country, and for all Peruvians who wish to develop in freedom, not in oppression,” he said.

Today 70% of Peru’s huge share of the Amazon rainforest has been leased for oil and gas exploration. That is 20% more than when I wrote this piece not long ago. These areas already include protected national parks and the land of indigeous groups with little explanation of how this could be allowed