I wrote last month about the attempt by Miraflores to outlaw the engrained habit of horn overuse. Lima is blighted by noise and much of it from people honking incessantly in vain attempts to make traffic lights magically change to green, to make traffic jams suddenly clear up or to justify the ignoring of traffic laws. Could the effort by Miraflores, just one district in Metropolitan Lima, start the ball rolling towards a quieter and more pleasant Lima? Who knows.

US Expat Ben Jonjak witnessed a publicity drive taking place in the heart of Miraflores, part of the effort to make commuters and transport providers in the district aware that if they don’t change their ways and obey long established laws they will soon be fined.

So I was just innocently walking along Calle Larco on my way to a restaurant where I was going to do a review, when all of a sudden a huge protest against people honking their horns broke out. I think this surprised everybody else as much as me because it was on a friday at about 12:30 when there really weren’t all that many people out in the street, but oh well. 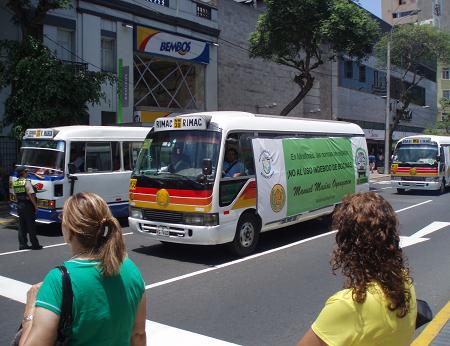 "In Miraflores, rules are respected"

Bocinas, that’s the word they were using for horn. Usually they use Claxon, but whatever word they use, I support the idea of having them stopped. Frankly, I’ve occasionally fantasized about walking around with a wire clippers and then just crawling under people’s cars to disconnect their horns…but then I’d probably get it wrong and snap the brakes and the next thing you know somebody would drive off a cliff and die and I’d have to carry that around on my conscience just like all the other dark spots that are growing all too heavy as the years progress….all…too…heavy…