Alejandro explains the Rimac River Project. (It was recently announced that a clean-up would cost more the $100m) 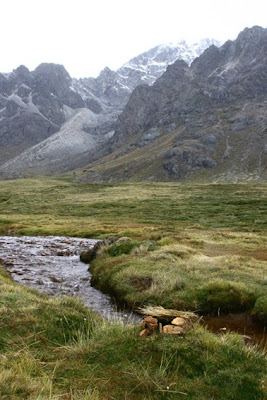 In the old days, they called it El Río Hablador, The River That Speaks.

During the winter rains in the Andes, the water would rush down so forcefully the sound of the constant grinding of the giant boulders that line the riverbed seemed to make a noise akin to talking.

I think that still happens at the height of the rainy season in the Andes; but, mostly when I think of the Rimac in its current state, I just imagine a polluted, uncared-for, and abandoned river.

As the Rimac approaches, and traverses Lima, it is akin to a giant garbage disposal system.

Three Peruvian artists (Jorge Luis Baca de las Casas, Alejandro Jaime Carbonel, Guillermo Palacios Pomareda) felt the same way, but decided to do something about it, creating the Proyecto Río Rimac, the Rimac River Project, which is both a love song and an accusation, a testament and denunciation.

They decided one way to raise awareness about this emblematic river was to walk, during 21 days, the entire length of the Rimac, from its genesis in the high Andean puna to the spot in the Callao Naval Base where its waters meet the ocean.

They took photographs, drew pictures, videographed, and blogged the project, from beginning to end.

Their blog is available in English and Spanish, and they plan on having an exhibition at the Centro Cultural de España, the Cultural Center of Spain, in Lima, during the APEC conference this coming October 2008.

I posted the above photos from the Río Rimac project.

It was too depressing to post the pictures of the river after man’s polluting hand.

Definitely worth checking out the following links:

They have great photos on Flickr, here are the links:

There was also a report on the Peruvian television program, Cuarto Poder, that discussed the project in Spanish.

Here is that video, in two parts: