The movement began at 6:41pm where for a minute or so, at least here in Lima, it briefly stopped followed by a stronger movement that shattered windows and cracked walls across the city.

Elsewhere in the country, detailed reports are yet to be heard, but there was no part of this vast country untouched. People reported feeling the tremors as far north as Ecuador and even out in the Amazon jungle.

After some confusion, due to the vast area in which the quake was felt, Peru’s Geophysics Institute reports that the epicentre was in the ocean just west of Pisco.

Reports of injuries in Callao as power cables collapsed. Some parts of the city of Lima are without power.

Lima has gone decades without a strong earthquake, something which has worried citizens during that time.

La Punta in Callao is being evacuated as a precaution, it is not thought that there will be a Tsunami, but as the area is only centimetres above sea level.

The cliffs of the Costa Verde, Lima, have shed rocks onto the road below. No injuries but the road is partially blocked.

17 have been killed in Ica, which is reporting being hit very hard, as a church collapsed. The city is without power.

Aftersocks continue in Ica and Lima. Six killed in Pisco.

Up to 70 killed in the Ica region, many more injured according to Alan Garcia.
All doctors called to work, all police on the streets.

President Alan Garcia has complained about Telefonica’s bare minimum investment in Peruvian telephony, leaving phones cut off in peoples hour of need. He states, sensibly, that in an earthquake zone phones need to be make earthquake proof.

So far as many as 70 aftershocks in Ica

Some of the beautiful buildings of the Barrios Altos have partially collapsed. Many people in the area will be without a home tonight.

Quake was not felt heavily in the tourism oriented south of the country. Arequipa, Cusco and Puno seem to have gotten off lightly.

Mobile hospital on route to Ica, in the wake of news of damage to hospitals. The mobile unit can treat 500 each day.

New numbers suggest only 7 killed in Ica and 20 in Pisco.

The panamericana sur in and around Pisco, Ica, Chincha is blocked by panicked people trying to travel in all directions.

The careterra central is blocked by fallen rocks.

Now no problems with regards to Tsunamis. People are being asked to return to their homes in Callao. Those in poor neighbourhoods will be spending a night or two on the streets incase of collapse.

The panamericana sur in and around Pisco, Ica, Chincha is blocked by panicked people trying to travel in all directions.

The careterra central is blocked by fallen rocks.

Detailed news of the Pisco-Chincha-Ica area is still difficult to get.
Various news networks are pretty much saying there won’t be detailed
news for a while yet (Thanks Telefonica).

A citizen in Paracas says several buildings have collapsed.

Mayor of Callao, Felix Moreno has reported more damage to Callao than first thought. Callao is suffering from sea swells flooding homes and streets, idiots committing crimes, and houses that are possibly unstable.

120 buses full of people are stuck on roads in the Ica region.
A hotel in Paracas has collapsed.

Currently 337 people reported dead and 800 injured. Many of the homes of the poor in Chinca, Ica, Pisco and Paracas have collapsed. Efforts to send supplies south are being hindered by a damaged Panamericana highway and a fallen bridge.

Rimac suffered the collapse of 5 buildings, one of them a quinta housing various families. 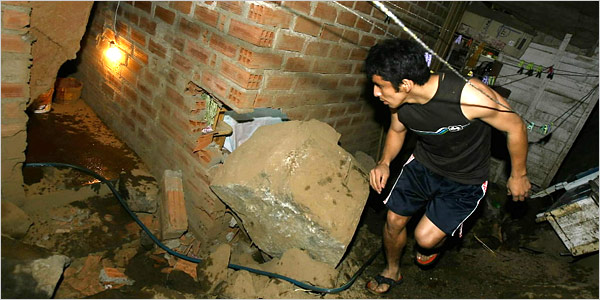 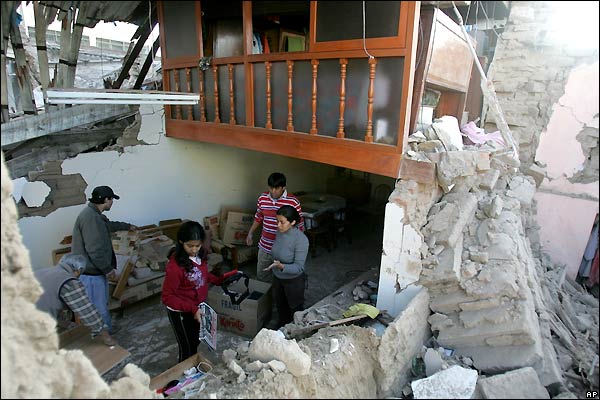 Two churchs in Pisco have collapsed. 14 are confirmed dead in San Clemente Church and 5 in Church of San Francisco de Asis.

Schools will stay suspended until monday.

It seems that in Callao 3 are confirmed dead. A newborn baby, a person who wasn’t able to be provided with oxygen due to power problems and and older person who died of a heart attack.

President Alan Garcia has arrived in Pisco. People in the street have been asking when more help will be arriving, the President has explained it is arriving by air, and that the panamericana is severely damaged.

Pisco looks in bad shape. Many buildings have collapsed.

This photo below by Capienzzo shows the damage rising sea swells caused to the Costa Verde, Lima. The first part of the earthquake is confirmed to have been 7.5 on the Richter scale and the second part 7.9.

This photo shows the state of a GOOD part of the Pan American highway. Buses full of Peruvians and tourists heading north and south around the Pisco area are slowly being help over and around the devastated parts of the Pan American highway. These people have been stuck on the road for almost 24 hours now.

The majority of the houses destroyed in the Ica area were of adobe (mud) which burried then suffocated those inside.