The Universidad Nacional Mayor de San Marcos, can be found on the Avenida Venezuela that leads from Lima to Callao. Here in a run-down industrial zone that was once the pre-hispanic city of Maranga, is a fairly large campus with not entirely attractive post-60s buildings. Little would suggest that this institution is the oldest university in the Americas.

San Marcos was founded in 1551 as the Real y Pontificia Universidad de la Ciudad de los Reyes de Lima (Real and Pontifical University of the City of the Kings of Lima), less than two decades after the founding of the city of Lima. With a royal decree issued by the King of Spain Carlos I and with a papal bull, it claims to be the first officially recognised university in the Americas – Santo Domingo’s was founded first at the time of the conquest of Peru, but didn’t receive recognition from the King until afterwards. Presided over by Friar Juan Bautista de la Roca, the first classes took place on the 2nd of January 1553 in the Dominican convent of Nuestra Señora del Rosario. The university then moved several times. First moving to the San Marcelo convent not far away, then found a new “permanent” home in the Plaza del Estanque, the fenced-off plaza where Congress is now located. As the city of Lima grew during the industrial revolution, President Manuel Pardo was forced to move the university in the 1870s to what was at that time nearer the edge of the city, to an old Jesuit monastery called the Convictorio de San Carlos, otherwise called La Casona.

I visited La Casona, now a cultural centre, only to find I had walked past it dozens of times to rich Av. Abancay from Jr. Lampa. I had seen a large sign on the wall many times stating that the building was undergoing restoration work paid for in part by the Spanish Government (who frankly should be doing a lot more). The result was wonderful. The building is now in very good condition and looks stunning. But as Lima’s population swelled from thousands to millions, and the city grew for tens of kilometres in all directions, San Marcos found itself in a increasing run-down central Lima with a building that just did not have space for more than a hundred of so students.

In the 1960s it moved to its present location halfway between Lima and Callao. Again, in those days, this area was suburban, mostly consisting of small residential areas and fields around the pyramids of the city of Maranga. In the 60s and for some time afterwards, many Peruvians considered archaeological sites worthless. San Marcos did a lot of damage, even destroying one pyramid to build a stadium.

The Municipality of Lima in the past months have been extending the Avenida Venezuela and in doing so had to remove the outer wall of the university and use a couple of metres of its land, provoking a furious reaction from students despite the municipality having received permission. The extension of the road also involved slicing through the Huaca San Marcos pyramid, and it is this part of the plan that has led to work being abandoned. Thankfully Peru’s usually incompetent cultural institute, the INC, has done its job correctly.

As well as being ferocious protesters, the students of San Marcos are also very capable. Getting into the university is very difficult, in fact, entry is near impossible for all but the very brightest students, mostly due to the fact that in Peru, if you are capable, university is free. 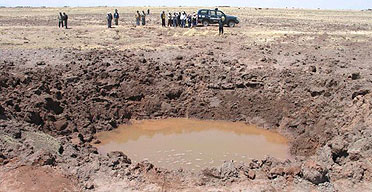