Maribel and I recently participated in a week-long tourism seminar held in Chiclayo. Representatives from towns and villages throughout the Lambayeque district took part, and some from outside the district were present. One entire day was devoted to graphic presentations from each town outlining their plans to increase tourism in the coming year. Pimentel was one of the participating towns and they put on a very impressive presentation, though many of the conferees expressed the opinion that Pimentel’s plans are much too aggressive. As mentioned in other posts, Peru and Chiclayo are growing, but how much of that money will channel into tourism is debatable. 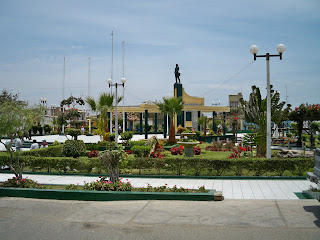 I’d like to show you Pimentel’s principal park first. Whenever I visit a town for the first time I usually start with the park because it gives me some indication of the character of the town.

This park is somewhat unique in that it has no main church adjacent to it but beyond that it is typical, bordered by the government offices and small businesses, all of them attractive and well maintained. 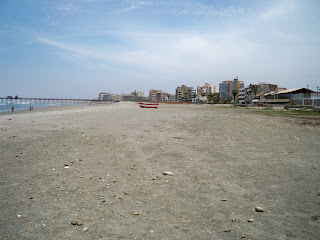 Chiclayanos are proud of Pimentel and many of them visit the beach during the summer season.

During the winter no one is there, which is a puzzle to me. The temperature difference during the day between summer and winter is barely noticeable, yet because the calendar says it’s not summer, the beach is deserted.

The accompanying photo was taken this last Wednesday on a warm spring day. The pier on the left extends out almost ¼ mile and is used primarily by commercial fisherman. It is ancient and there are plans to refurbish it but at present it is simply a curiosity and in my opinion a safety hazard to tourists. 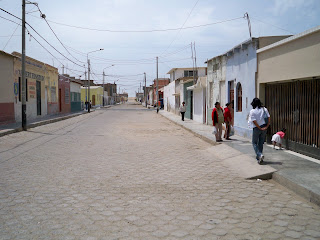 A typical street in Pimentel. Like most smaller towns, there is no business district per se, though there is a small mercado where produce and some smaller hard goods can be purchased.

The little girl at right was not being noisy. She was engaged in conversation with a little boy who was also stooped over. Maybe they were telling secrets, or pledging their undying love to each other. They start young in Peru. 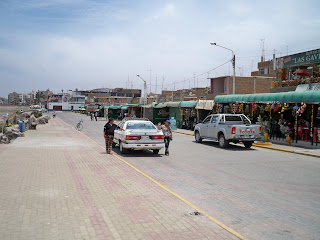 The boardwalk (malecón in Spanish) is approximately 1 1/2 miles from north to south and has four distinct parts. The southern-most segment is made up of what I would term bohemian restaurants, pictured at left.

The staff of these restaurants; usually young ladies are very aggressive and will approach visitors on the beach to solicit business. It is not unusual to be surrounded by 4 or 5 of them, all talking at the same time and occasionally pushing one another out of the way.

It’s not anything I find objectionable but can be overwhelming to first time visitors. If you click on the photo you’ll be able to see the hostal in the distance, which begins the second segment of the boardwalk, containing more restaurants but without the bohemian flavor. 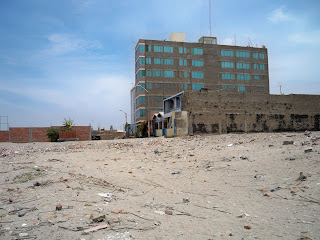 The third segment is comprised mainly of condos and apartments. Some of the buildings are fairly new while others are dilapidated with several of them literally crumbling. This is a condition I see throughout the country.

I know that probably every city in the world has examples of the old and new standing side by side, but I have never seen the extremes that I have in Peru.

As an example, the only legitimate hotel (pictured above) in Pimentel, the Gran Hotel located separate and south of the boardwalk was completed last year and is fairly impressive but is surrounded by squalor and poverty. 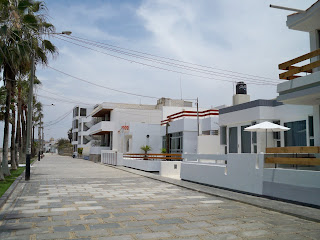 The final section of the boardwalk is relatively new and contains dozens of upscale single family homes with beautiful landscaping.

It is this influx of wealthier people plus the fact that a huge new subdivision just outside of town is presently being worked on that leads me to believe Pimentel just may someday be the premier tourist town in the north. 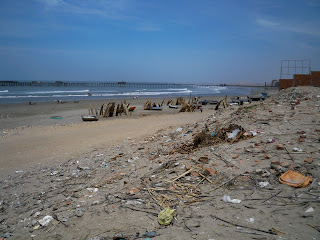 But there is still work to do. Many areas of the beach are an eyesore.

It’s going to require constant cleaning along with the placement of trash containers and the education/cooperation of the locals to use them.

The deserted old houses on the boardwalk need to be dealt with. Potential tourists also have a responsibility.

The town has areas of wide spread poverty. Visitors need to realize this is a developing country, and developing quite well in my opinion. 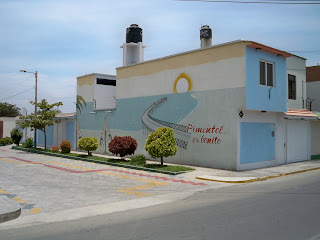 I agree with the sentiment expressed in this photo.