According to some of the climate change models that were reported on the news here some time ago, predictions were made that showed in as little as 50 years the Amazon could dry up to become an arid savannah. The dense tropical forests would be replaced open grassland, and eventually, desert. 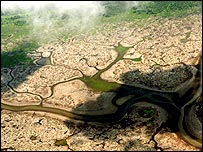 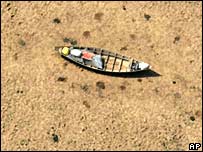 This process, according to some, has already started. 2005 saw rainfall in the Amazon at record low levels. One of the wettest places on earth suffered a drought, as seen in the photos above. Villagers were stranded at the banks of dry river beds, helicopters were used in Brasil to deliver food to those who had none. This year, as in 2005 and 2003, river levels were at near record lows. In Peru this has meant shipping lanes closing, or river trips that once took days now taking weeks.

So, when I heard of new research today, that stated that the rainforest could cope with higher temperatures and dryer weather better than we thought, I was happy to hear some good news.

The research showed that during the drought of 2005, rather than dying off, resilient plant life not only kept going but increased their rate of photosynthesis – becoming greener and absorbing more carbon dioxide – as a by product of trying to retain more water. This means the Amazon would be able to survive short term droughts.

But, with droughts occurring more frequently and for longer periods of time, its not all good news.