Peruvian Gossip Queen Magaly Medina will not be torturing (often guilty) celebrities with paparazzi and hidden cameras any time soon – one particular vicious attempt of defamation repeated over the course months of her TV show and magazine, probably entirely justified, has landed her in jail for the unprecedented time of 5 months while her TV producer Ney Guerrero got off “lightly” with a “mere” 3 months.

The whole legal debacle started nearly a year ago when a scandal involving the Peruvian National Soccer Team’s sexual rendezvous at a posh hotel paid for by the Federation came to the public’s attention. If there’s one thing that anybody in Peru knows is that the National Soccer Team is never shy of a shameful scandal!

Medina accused pretty boy Paulo Guerrero, a member of the team, of sneaking out of the hotel to go wine and dine a Peruvian model at U.S. based restaurant chain, TGIFridays in the Limean district of Miraflores. On her program Medina presented videographic evidence that was later debunked by the Federation. (Talk about an impartial investigation!)

Magaly still contests that the photographic evidence was taken at 2am the day before the big game and not 2 days before as Peru’s national coach claims or 7pm the day before as Paulo Guerrero claimed. In all honesty, I think is entirely plausible that the shots were taken 2am considering all of Peru’s footballers spend their time back home partying and losing matches rather than training and winning matches. Despite having some great players, evidenced by their huge salaries in Europe, when they put on their national shirts they are too hung-over to play and often couldn’t care less – there are no fat bonuses for performance for the national team, so why bother winning, right? When playing for Peru, they are only paid tens of thousands of dollars, not millions, so there could not possibly be any obligation to try to win, could there? Surely Peru has money to burn on losers.

Paulo Guerrero (Hamburger SV), clearly irritated in a press conference, denied the allegations and shortly after proceeded to file suit against Medina for civil damages and defamation.

S/.80,000 (PEN) OR $26K in USD is chump change when your son is making MILLIONS OF EUROS playing in Europe and receiving THOUSANDS OF USD for embarrassing and losing for Peru! José Guerrero told the press that Magaly Medina can no longer feel “All Powerful.” As for his son feeling “All Powerful,” well that comes with the territory of being an international soccer star.

Her lawyer, Cesar Nakasaki, affirms that there were many discrepancies with the trail process. He is angry that the judge refused without reason to hear the testimonies of Magaly’s reporters, those who collected the evidence and stand by their claims. According to Nakasaki, as well as being unusually strict in sentencing, the whole judgement seemed predetermined and biased. Interestingly, to obey Peru’s transparency laws -implemented to combat rampant corruption in the judicial system- the judge must make all reasoning in his/her conclusion available to both prosecution and defence, and court room staff must make all paper work available. So far, odd delays in the judgement publication have taken place. What should have been available in minutes is still not available after 24 hours, and according to Nakasaki, documents were kept from him without reason during the trial. He says he was given the run around.

Magaly says the whole process has been a smoke screen – and that is one of two likely conspiracies. Blighted by a recent corruption scandal, Alan Garcia’s Government and his APRA party have been in the news day after day. The story of how Perupetro and government ministers requested bribes for oil exploration contracts was covered around the world and has greatly embarrassed Peru’s government less than a month before it hosts the APEC conference and is descended upon by some of the world’s most important leaders. Could it be that the Government wanted the public’s attention turned away from their dirty deeds? Could they have arranged for an overly strict headline-grabbing jail sentence?

The other possibility for corruption and conspiracy comes from Peru’s football authority. This corrupt organisation is incredibly wealthy and powerful, with undue influence in Government – so much so it might as well be renamed the Ministry for Football. Could money have changed hands or favours have been given to get Magaly off the air? It would seem plausible since efforts were made to target her producer too – at least with him in the picture a substitute host could have been found. Magaly has rightly been very critical of the authority and Peru’s national team. It is also worth mentioning that with other football scandals involving players and drunken orgies in hotels, scandals that pretty much happen every time the team plays in Peru, all security tapes from these hotels on the nights before important games took place are accidentally “lost”. If the team is seen drinking all night before an important game, you can be sure Peru’s football authority will arrange for the security cameras to be broken that night. You’d only have Magaly’s word, her photos and an investigation launched by the authority itself clearing everybody of wrong doing to make your judgement.

There is another question too… since when is defamation a criminal offence? What does this mean for freedom of the press in Peru? Can any journalist voicing opinions go to jail rather than risk his his reputation in a civil suit? The Instituto Prensa y Sociedad, Peru’s independent journalism forum is not happy. It is adamant that no jail sentences should be handed out for any form of abuse of free speech, that such themes should be dealt with in civil courts, not criminal. This is a view shared by the thousands of Magaly supporters that were camped outside Lima’s Palacio de Justicia, from which Magaly was driven away to jail after sentencing. Impeding the passage of the police transport van, they demanded to know why rapists, murderers and muggers were out roaming the streets while all this attention is paid to Magaly – a view I tend to agree with.

The problem with the case and the sentencing is that the shoe doesn’t fit. Evidence of Guerrero’s activities were investigated by a corrupt federation and evaluated by a tainted judicial system.

Magaly is absolutely far from being Peru’s sweetheart, but Paolo Guerrero hasn’t been the exclusive fodder of mockery for Medina’s television program. Paolo Guerrero is often portrayed by Peruvian actor and comedian, Carlos Alvarez, who plays Guerrero as a sensitive, soft spoken and whiney homosexual in his own popular television program, El Especial del Humor (”The Special of Humor”) as well as in his theatrical comedy shows.

This case gives public figures the precedence to go after other television personalities, such as Alvarez, for defamation. The grey line has been defined. Television, Radio, Newspapers, Blogs are now fair game! 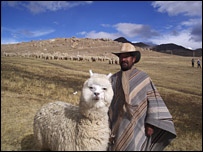