This entry follows the previous one, which contains news and updates from the moment of the quake until Thursday afternoon (the next day). It also contains replies to specific requests for information.

What was Pisco, from Andina

It is Thursday night, 16th of August. At this time images and interviews have finally begun to be shown direct from the areas affected. The towns of Pisco, Paracas and Chincha are devastated. The majority of buildings seem to have collapsed – somehow, miraculously, only causing 510 confirmed deaths so far.

Roads are beginning to be opened south, and people are rushing south to find out what happened to their uncontactable families. At packed bus stations, those who live in the area or have family their that they are able to contact have in the majority been given bad news. There is anger also as the cost of tickets have been raised.

Hundreds of buses trapped by damaged bridges and roads, notably the Pan American highway are slowly reaching their destinations as temporary repairs are made. Footage from the streets of Pisco show very extensive damage, there are corpses still laying in the rubble. The body of a tourist has just been recovered, crushed by failing buildings.

Buildings of national heritage have collapsed and the famous natural sea-arch in Pisco is completely gone. It is said most of Pisco’s historic port is lost. The old part of the city of Cañete is lost, including the city’s first church built in the 1500s.

In Tambo de Mora, two prisons collapsed, allowing hundreds of dangerous criminals to escape. So far 29 have been caught. Unfortunately efforts to catch the fugitives is tying up resources that could be used elsewhere.

Aftershocks are lessening, but people are warned to be aware of the possibility of more quakes in the coming days. Update (10:15am):
A strong aftershock hit this morning around 8, centred in the same region, waking many people from their sleep including me in Lima.

Update (8:30pm):
Desperate people hungry and cold have began raiding shops and supply vehicles heading to the centres of attention. President Alan Garcia said the behavior cannot be tolerated and that supplies can not be taken home to home. People are urged to go to the help not wait for it to come to them.

Update (8:55pm):
Latest news suggest the tiny town of El Carmen along with many of the tiny towns I visited on my trip to Chincha lay in ruins. Help has yet to arrive to places outside of the main cities. Roads are destroyed and access is difficult.

Update (11:59pm):
The news has reported an earthquake in Piura measuring 4.1, no damage is reported.

Update (Saturday 1:00am):
The streets around the multiple donation points in Lima are still FULL of people bringing anything they have to donate. It is expected to stay that way all night. We are going tomorrow.

Update (Saturday 10:00am):
The army are sending 1000 more soldiers to the region to maintain order in the wake of lootings and robberies. Rioting was seen yesterday as people demanded more help and faster help. 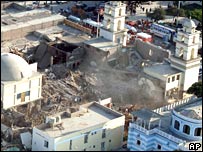 The San Clemente church in Pisco which collapsed has so far yeilded 127 bodies. The day’s mass was ending when the earthquake struck, and few survived. The priest, Luis Miroquesada, recalled jumping under a table to survive.

“It happened just as the mass was ending, at the point when all the participants move to the front to greet the grieving relatives,” he told Reuters news agency.

Currently only 2 people have been pulled from the rubble alive.

Update (Sunday Morning):
So far less than 100 of the escaped prisoners from Tambo de Mora prison have been recaptured. According to anonymous reports from members of Peru’s national police, the prisoners escaped because guards abandoned their posts.

In the more remote towns around Pisco and Chincha, residents are saying they are yet to receive any help. According to some who have managed to make the journey to the main city centres, all aid is being concentrated there, with nothing being done to help those in more remote areas. Some desperate people have taken to looting of passing supply trucks.

Criticism is being heaped on the Government by those saying no plan seems to be in place and things are being improvised. The Ecuadorian Red Cross states that things are less ordered than they expected – they arrived in Lima 2 days ago without being received by any state representative. Not knowing what to do, they slept in a field next to the run-way before finally being transported the next day.

More criticism too for those who are taking advantage of the disaster to make quick money. Bus company Soyuz/PeruBus among others have risen ticket prices of buses south by 50-100% in an attempt to milk worried and devastated relatives of every penny they have. On the other hand, company’s such as drinks producer Backus have donated 100 trucks to help carry supplies south. Chilean group, Saga Falabella have donated hundred of tents.

Points of collection across the city, asking for clothes, medicine blankets and food, are still received tonnes of what they need. Points across the city are busy with hundreds of volunteers, some fainting for lack of food, loading supplies into trucks.

President Uribe of Colombia has arrived in Pisco with dozens of ministers and experts to lend any support he can. Supplies have also arrived from Bolivia, United States, Venezuela, Chile, Mexico, Argentina, Ecuador among others.

Desperate people in towns such as El Carmen and Lunahuana are still waiting for the first signs of help; aid is still yet to make it out of the major population centres of Pisco and Ica. Due to the damage of roads in the area, most of the aid that has arrived so far has done so by air. Prime Minister del Castillo has asked for patience as desperate people loot after 4 days without food, water or shelter.