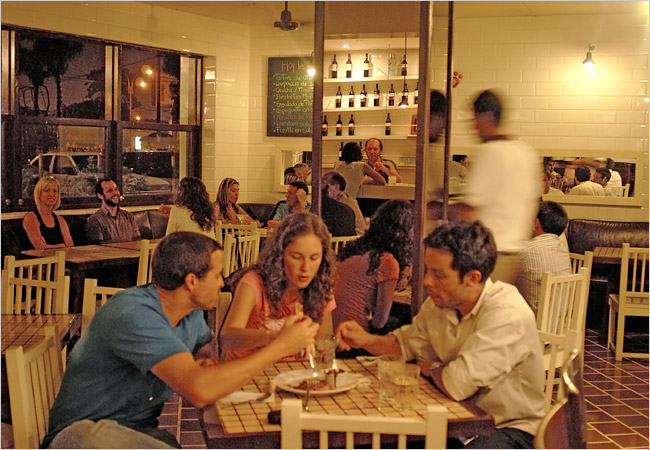 At LA 73, diners sit in a room with subway-tiled walls covered in art posters (Susana Raab for The New York Times)

YOU feel the buzz as you approach La Mar — in a smart industrial-gray cement building in a neighborhood of auto body shops. Chauffeurs line up around the block and stand outside their cars after dropping off the sunglassed socialites who stream down the entrance walkway. Bamboo lines the path like paparazzi, and everyone turns to see who’s arriving. The upbeat music of the Colombian pop group Aterciopelados blasts from speakers overhead. It’s a party, but what could be going on now, at 1:30 on a Tuesday afternoon?

Inside, attractive Peruvian 20-somethings drink pisco sours at the bar, ogled by slick-looking men dressed in black and wearing black Gucci sunglasses. Businessmen in suits eat plates of raw fish while the crowds lining up at the hostess’s stand scan the surroundings for empty tables.

The open dining room feels more like an outdoor terrace: sheltered with leafy palms, roofed with bamboo and partly open to the sidewalk. Everyone appears to know everyone, and you’d think you had dropped in on the most exuberant party at the beach, although it’s unlikely you would find such impeccable service, or ceviche served in martini glasses, at a beach joint.

In a country where the restaurant scene is in full gastronomic swing, La Mar, in the prosperous district of Miraflores, is the most exciting new spot, embodying a cuisine that is bringing together disparate ethnic influences both on the dinner plate and in a new national pride. The owner is Gastón Acurio, a celebrity chef who also runs the more formal Astrid y Gastón with his wife, Astrid. Perhaps it is because he is the son of a former prime minister and senator, Gastón Acurio Velarde, that Mr. Acurio holds an avid interest in the power of culinary success to bring not only international recognition but also, by extension, a feeling of national identity that can move Peru forward.

“Food is becoming a powerful symbol of what we are, and the most important thing about our food is the mixture,” Mr. Acurio said. “We are proud of that mixture now.” The word that describes their mixture of Andean, Spanish, Italian and Asian — in both food and culture — is criollo.

“The moment we became as proud of what we are as we are of our food,” Mr. Acurio said, “is the moment the country can turn.”

Eating is the gateway to Lima’s social scene, and one day and night, beginning with lunch, is enough to get a feel for the social landscape.

In the same way Americans eat sandwiches for lunch, Peruvians eat ceviche (raw fish soaked in lime juice) or other fish. La Mar is a cevichería, one of hundreds in Peru. Like other cevicherías, it is open for lunch but not for dinner. “Seafood is for lunch, ” Mr. Acurio said. “A long time ago, you would get sick at night from the raw fish, so it became a habit at night to eat meat and pasta.”

Mr. Acurio styled La Mar after a neighborhood spot called Sonia. “I wanted to keep the basics of the classic rustic cevichería,” he said. “You don’t need to find wonderful food only in pretentious restaurants.”

La Mar’s enormous sea-blue menu is arranged like a sushi menu: it starts with raw fish and works into tempuras and entrees of rice and cooked fish. The ceviche of raw Dover sole is served in the typical Peruvian style, with sweet potatoes and pieces of corn, the sweetness offsetting the acidity of the lime.

At the original Sonia, in the beach neighborhood of Chorrillos, customers sit at simple wooden tables in a colorful blue and green room. A slatted bamboo roof lets in light. The walls are hung with fishing nets and photographs of the owner, Sonia Baramonde, with luminaries including the chef and food writer Anthony Bourdain. (“Lunch in Lima is exciting and very sophisticated,” Mr. Bourdain said. “It reminds me of the daytime version of Barcelona food culture — it is very metropolitan.”)

The fare at Sonia’s is fried calamari and ceviche, plates of rice and Inca Kola or chicha morada, an extremely sweet blue corn drink that is an acquired taste. Lunches are loud and energetic, with platters passed around tables and people eating off one another’s plates and drinking Cusqueña beer (supposedly made with the best water from Cuzco). Lunch goes on for hours, and while the food is less remarkable than La Mar’s it is equally fresh, and the restaurant draws a fashionable crowd.

Another boisterous lunch scene can be found at Canta Rana, just north of the city in the trendy neighborhood of Barranco. Soccer memorabilia covers the walls, and a handsome crowd munches corn kernels and drinks Inca Kola while waiting for scallops Parmesan. Some patrons eat, walk around the neighborhood and then come back and join another table, or linger and order a second lunch.

After lunches that are this much fun, one might think Lima night life would be disappointing. But it’s a whole other world, with a whole other menu. Jaime Barco, a lawyer who grew up in Lima and is part of the Peruvian party set, described the night scene as “better than Santiago and worse than Buenos Aires.”

Mr. Barco was having dinner one night in Barranco at LA 73, named after the bus stop across the street and considered very cutting edge in conservative Lima. In a room with subway-tiled walls covered in art posters, cool-looking artists dine on novo Andean dishes next to aristocratic bohemian families from the neighborhood. The manager, Marco Pacheco, said: “We try to combine gourmet food in an informal atmosphere. Typically, people eat here around 9 and then go to parties or clubs afterward.” LA 73 serves delicious strudel de carne, a flaky pastry enclosing rich meat spiced with hot pepper and what tasted like cinnamon. The house dessert is churros, fried dough in sugar dipped in hot chocolate sauce.